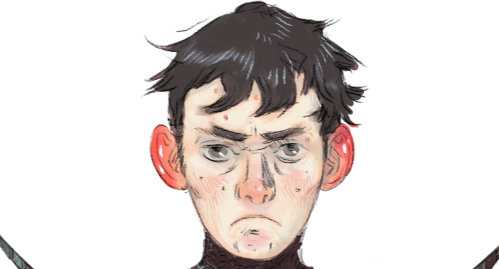 From the moment he and Simon meet in The Camelot Kids, they hit it off, notwithstanding some awkward moments.

Indeed, Red is the only person who even tries to get to know Simon when he first arrives in Graham Academy, a private school near his Uncle Victor’s home.

But Red also appears to be a fearful kid.

He scampers away at odd times. He talks to himself a lot. Simon, always one to stick with a friend, doesn’t think much of it.

But he should trust his gut more…

Here’s the set up for the following scene from The Camelot Kids: Simon’s first day in his new school, Graham Academy, is not going well. He’s late for everything. He’s already a gossip magnet, and no one will look at him much less talk to him. Except for one girl, Gwen. She helps him find his next class just in time.

Simon does his best to get her attention throughout the class, but she just joins the rest of her classmates in ignoring him. Little does he know, Simon is on the verge of a friendship that will change his life forever…

As he gathered his books, he noticed a small boy with pitch-black hair, and the reddest ears he’d ever seen, sitting at a desk near the back of the class room. It was the kind of red you see in candy stores and comic books. The boy gave him a look as if he were sizing him up for a fight. But that was ridiculous. The kid was so small that a fight with a kitten could go either way.

“Her name is Gwen and you might as well give up now.” The kid spoke in a high, squeaky voice with a heavy Scottish accent.

“The girl you were dancing in yer chair to see all class long. You should be careful. That’s the kind of thing kids look for in this class so’s they can use it against you later.”

Red squinted. Simon worried that he’d gone too far, too fast. He tended to do that with people sometimes. What business was it of his what this guy called himself?

“Never really thought about it,” Red finally said. “I guess not. But I’m used to it, so call me Red.” Simon didn’t have much left, but he gave his best smile.

“Simon, yeah. The guy who took the heat off me. Now that yer here they can start dumping you head-down in the garbage pails and leave me alone.”

“Sounds like a plan.” Simon wondered how much a ticket back to New York would cost.

“If you want to get out of here with some sense of dignity you better not go through the front door of the school.”

“But that’s where my ride home is.”

“I’m just sayin’. Do what you wanna. It’s not like I’d know anything about it, being that I’ve found a way to survive here for two years.”

“Falcon Castle.” Red’s ears glowed purple. His eyes got wide and even teared up a little. “What’s wrong?” 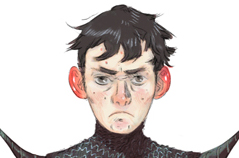 “I didn’t realize you were that Sharp family. His castle is bad news, friend. Everything I heard is that it’s haunted at best and filled with maniacs and monsters at worst. I’d rather sleep in the forest, if you ask me.”

“That’s what you think they are? You ever seen one of these supposed dogs?” Now that Simon thought about it, he hadn’t. He’d thought he’d seen a dog in the room with the weapons, but it was too dark to see. It had sure sounded like a dog. What else could it be? “My allowance is on them being not-dogs.”

“Then what are they?”

“You tell me,” Red shrugged. “Yer the one living there.” He started to unwrap a candy bar and munch on it as he passed by Simon. “I’ll show you the safe way out of here if you wanna know.”

Simon sighed and followed. Red walked close to the wall as they wove through the halls. He peered around corners before he turned them. Finally, after a lot of sideways glances from other students, they passed through a small door to the outside. Simon stuck close as Red worked his way down a steep hill. They didn’t stop until they’d entered a thick forest behind the academy. The sun made barely a dent here, with large dark shadows giving way to weak rays of white light. Simon had the sense the ground beneath their feet wasn’t all that solid, as if jumping up and down would send them falling into an abyss.

Red started to work his way through the trees. “No one comes back here except people who are running from something.”

“Yeah, I can see why. How can you even tell where you’re going?”

“Relax, Wendy Worrywart! We’ll use the trees when we need ’em. I climb like a spider!” Red struck a pose like a tiny, dippy Spider-Man.

They worked their way through the shin-grabbing brambles and found a trail. In the distance, Simon could make out the school’s front entrance where Hector’s car was parked, waiting for him. The red-haired jerk was hiding behind a shed, probably waiting for Simon to emerge from the school.

“His name’s Chester,” Red muttered. “Second meanest person in town behind his mother. His goons are the dumbest ones in class, which also means they’re the strongest around here.”

“Best of the worst.”

“Exactly. You know the type, I guess.”

Simon thought of Billy, back in New York. He wondered how he was holding up. Hopefully he wasn’t on Brad’s radar. “Yeah. We have them in New York too. But I mostly found ways to avoid them.”

“Now you have to start all over again, huh?”

Red sure was a bundle of fun.

Simon’s new friend climbed tree after tree to keep an eye on the overgrown path. They barely spoke for the entire trek, which left Simon some time to think about how ridiculous it was that he’d somehow escaped St. Mary’s for good, and yet there he was, tearing up his knees on Scottish thorns just to avoid another bully. Was he any better off here? The fact that he didn’t know the answer worried him. Should he start thinking about how to break out on his own?

After an hour, they started a descent into a small valley. Simon spotted Falcon Castle peeking over a nearby hill.

That’s when he got that feeling again. The one he’d had in New York so many times before.

Like the Gates of Weird had been thrown open.

Red seemed jumpy all of a sudden. He licked his lips like a lizard and didn’t blink. They pushed their way out of the trees, and stopped at the edge of a road.

He tripped on a rock and fell on his butt. “I’m not getting any closer!” He shook his head, frantically.

Simon wasn’t sure what the outburst was all about. It wasn’t as if he were going to force Red to come along.

But Red just stared at him.

Red watched from the ground as Simon walked off. When Simon looked back he was gone.

So there he was, alone on the road, with the light fading. It was too quiet for his comfort. A bird sang on occasion, but that was it. As he got closer to the castle he realized that he might have a hard time getting past the estate gate since he wasn’t with Hector. But he’d figure something out. He always did.

Simon took a moment to admire the nearby grounds. The area was beautiful, but still. Nothing moved in the green of the ground or the vast gray sky. It was as if the entire world was doing its best to not disturb his uncle.

As he climbed the steep road to the gated entrance, he could feel eyes on him. He had company. He was sure of it. He took a deep, fortifying breath and turned fast. A dark figure stood on the road, around twenty yards away.

Simon backed up a couple of steps.

The person ran toward him.

It was Maille, the girl from the airport. She held a baseball bat in one hand. It glowed bright orange as she raised it over her head.
Simon ran.