Want to write on your iPad and sync with Google Docs?

UPDATE! Google has finally released Google Drive for the iPad, with editing built in! Read my review here.

I want to write my book on my iPad. I want to sync it with Google Docs. I want it to be as easy as using the simple but excellent Google Docs editor that I enjoy on my home computer.

I can have it all if I’m willing to keep it simple. I’m writing a book. I’m out of luck.

To put it simply, this is what you can do if you want to write on the iPad with Google Docs.

1) Go to docs.google.com on Safari with the iPad. Safari appears to behave best with Google Docs compared to the other iPad browsers, but experience may vary.

NOTE: You may run into prompts that tell you the browser isn’t compatible, just press ‘Cancel’. Don’t press ‘Okay’ or you’ll reload the page and get the same error again. 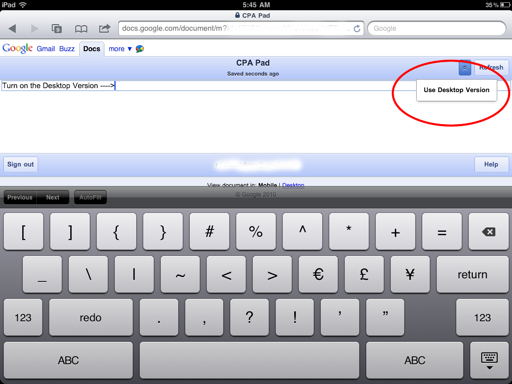 3) Start the doc on Google Docs. Don’t import a large document. More on this in two lines.

Then the document will grow to a size that the iPad or Safari doesn’t like at all. I’ve found that if your doc is three pages long or more the iPad/GD experience degrades to uselessness. There’s just no way to make it work well. I made the mistake of importing my book’s 400 page draft. Forget it. Typing one letter takes a couple of minutes. I’m not sure if it’s a Safari cache issue, an iPad issue, or a GD browser incompatibility (as the error message implies). But whatever it is I hope “they” fix it. There isn’t a single good solution for having an elegant iPad/Google Docs experience. I’ve bought all the main word processors (so you don’t have to), including Docs 2 Go, which works horribly.

Let me know if I’m missing something.

Update: Another month of searching for the perfect solution. Another month of disappointment. I’m trying Pages for ipad with iCloud and there is no true syncing of docs. It’s a disaster for anyone who works on both PC and iDevices. I’ve started to use Memeo Reader which is similar to GoodReader but focuses on syncing Google Docs and promises an editor soon. I’ll try it out when it’s released and update again.

Update #2: Well, it turns out you can edit docs when you choose “Mobile” setting in Google Docs on the iPad. Previously I was unable to get the mobile version to preserve any formatting. I’m assuming that was a bug that got fixed by Google or Apple. The bottom line is that I’ll write/edit in Mobile mode for awhile and see if that suffices. To edit in Mobile mode just skip step #2 above, and click on Edit in the upper right of the screen. I’ll also be keeping any eye on Memeo Editor.